Cyclospora is a parasitic infection that can make you sick. The parasite typically does not infect animals, so animal to human transfer is very rare.  Also, infections are rarely, if ever, spread from direct contact from one person to another.

In recent years, Cyclospora outbreaks have been linked to imported produce from Mexico and other Central American countries. The first Cyclospora infection in humans in the United States was diagnosed in 1977, with the first known outbreak found in three individuals on the island of Papua New Guinea in 1979.

As the infection has a fairly long latency period (the time from exposure to the showing of symptoms), these types of infections are often difficult to diagnose or find out the cause of the infection.

If you have contracted a Cyclospora infection from contaminated food, contact the Cyclospora lawyers at The Lange Law Firm, PLLC. Our team can help you explore your legal options during a free consultation.

Cyclospora is the common name for the parasite Cyclospora cayetanensis. Thus far, this is the only species of Cyclospora known to infect humans. According to the Institute of Food Science and Technology, there are about 16 known Cyclospora species that infect primates, other mammals and reptiles, none of which infect humans.

This parasite is a one celled organism too small to be seen with the normal eye and responsible for the intestinal illness cyclosporiasis.  While naturally occurring in more tropical and underdeveloped areas of the world, it makes its way across the world in a few different ways.  Humans are the only known hosts for this organism. So, these parasites either live in watery environments or in the intestinal tracts of humans.

The very young, the very old, and those with a compromised immune system are most susceptible to infection with this parasite. Young children and AIDS patients experience a higher rate of morbidity than other groups. People who are living or traveling in areas where endemic are also at an increased risk for infection.

The disease is spread when the parasite oocysts (a type of egg) are passed in feces. It takes about a week for these eggs to mature to become infective again. When contaminated food or water are consumed after eggs reach maturity, the cycle restarts.

What are the Symptoms of Cyclospora?

Symptoms of Cyclospora infection often begin within about a week from infection.  The parasite likes to live and grow in the small intestine and is responsible for watery diarrhea, frequent and sometimes explosive diarrhea. Other common symptoms of this infection include:

While infections can resolve without treatment, symptoms often persist for anywhere from a few days to months. Relapses and reinfection are very common, so someone who has not been appropriately treated can expect to be ill over and over for several life cycles of the parasite.

Are there Long-Term Complications of Cyclospora Infections?

In some cases, an infected person may have long-term issues. These long-term complications may include:

Where Do You Expect to Find Cyclospora?

Cyclospora is found in tropical and subtropical regions of the world, like Central America. Those living and traveling to these areas are at increased risk of infection. Cyclospora outbreaks in the United States are generally spread through imported produce. Other outbreaks have linked the illnesses in people who have recently traveled to endemic areas of the world.

The increase in infections to non-endemic areas (like the United States) seems to increase in parallel with the globalization of the food supply. Namely, the import of products from other countries into the United States. Now, more than ever, people can enjoy foods not made or grown in their own region.  This fast transport allows even fresh foods and vegetables to be brought across international and oceanic boarders.  These raw or potentially undercooked foods could be contaminated with fecal-contaminated irrigation water, thus exposing consumers to Cyclospora and other harmful parasites and bacteria.

The life cycle of this parasitic organism makes it unlikely for the illness to be passed directly from one person to another.  The infected stool has to stay put for a week or so before being transmitted to others in an infectious form.

We’ve briefly touched on how the life cycle of Cyclospora impacts human infection and transmission.  Knowing a little bit about how this organism lives and breeds can help you better understand how infection spreads.

When an infected person passes the parasite oocysts in their stools, it is not infectious.  It is sort of in an egg or base state.  It takes a few days to weeks at a temperature between 22 ºC to 32 ºC for “sporulation” to occur.  This is a sort of “hatching.”  Once the sporocysts are created, they can infect water and fresh produce and eventually ingested by an unknowing human.  These harmful parasites wreak havoc on the gastrointestinal tract of the infected party. They begin to invade the cells that line the small intestine and start their reproduction process. The organism starts to replicate itself, maturing into the oocysts that will be eventually shed in the stool.

The oocytes in the stool hang out in the environment until they reach optimal conditions and then become infectious again. 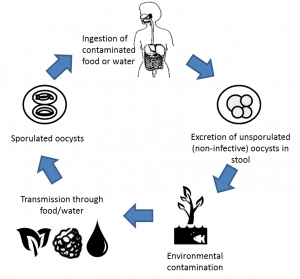 Photo from the Institute of Science and Technology

How is Cyclospora Diagnosed?

For definitive diagnosis, laboratory testing must be performed.  This is not an endemic organism, so this isn’t something that is routinely tested.  A healthcare provider needs to be informed of any traveling the infected person has done and foods eaten during the trip to be tipped off to test for Cyclospora infection. Additionally, stool samples over different days may also be needed to capture the oocysts shedding in the sample.

The organism can be identified by microscope work or other more modern molecular methods.  At this time, advanced DNA fingerprinting and genotyping typically used in foodborne illness investigations are unavailable.  This is largely due to the limited DNA sequence data for this organism, though current research is being done which can help develop these tools in the near future.

How is Cyclospora Treated?

While many who have healthy immune systems will recover without treatment, the process of recovery is often long, and relapse is likely.  When properly diagnosed, a pointed antibiotic regimine of trimethoprim-sulfamethoxazole (brand names Bactrim, Septra, or Cotrim).  Rest and plenty of fluids are also part of the healing process to ensure full recovery.

Those who are unable to take sulfa drugs have few options, as there have been no effective alternative drugs identified at this time.  It is still a good idea to seek medical treatment from your healthcare provider, as some options may be available – just less effective.

How Can You Prevent Cyclospora Infection?

Prevention is the best way to avoid Cyclospora infection. Unlike some infections, having prior cyclosporiasis provides no immune response to the parasite.  Those who have been infected before can become infected again.

Avoiding contaminated water and foods that might be contaminated with this harmful organism is the best way to avoid infection.  Unfortunately, treatment with chlorine or iodine is unlikely to kill the Cyclospora oocysts.  Also, no vaccine is currently available.

When consuming fresh fruits and vegetables, primarily from areas where Cyclospora is endemic, proper cleaning is key to reduce risk of infection.  Thoroughly wash under running cold water and segregate from unclean produce to prevent cross-contamination.