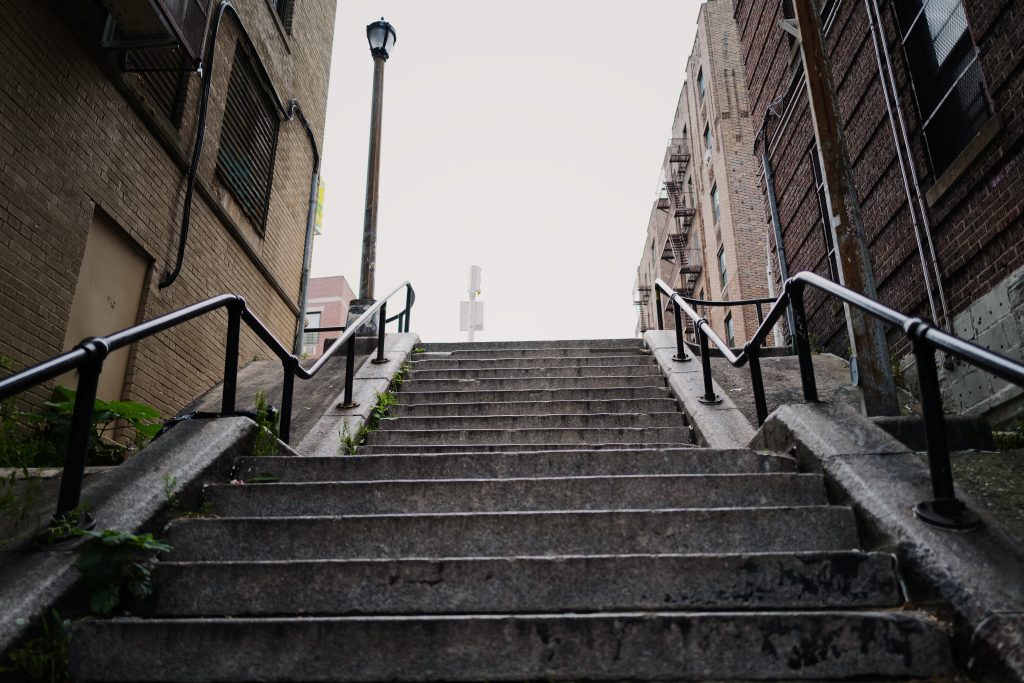 Another outbreak of Legionnaires’ disease had hit the Bronx. Here is everything we know about this 2022 Bronx Legionnaires Disease Outbreak:

New York City health officials report that two people have died and least 24 have been infected with Legionnaires’ disease in the Highbridge neighborhood of the Bronx.

Per the local media, the cases appear to be linked to four water cooling towers on top of buildings in the Highbridge neighborhood of the Bronx, where officials said they found Legionella pneumophila, the bacteria that causes Legionnaires’ disease. The addresses of these buildings has yet to be announced.

Per the NY DOH:

The Health Department today provided an update on the investigation into a community cluster of Legionnaires’ disease in the Highbridge neighborhood in the Bronx (ZIP codes 10452 and 10456) and bordering communities. Nineteen people have been diagnosed with Legionnaires’ disease since May 3, 2022. One person has died, and 8 people are currently hospitalized. The Health Department has sampled the cooling towers in the area. Four cooling towers tested positive for the presence of Legionella pneumophila, a type of bacteria that causes Legionnaires’ disease, and were immediately ordered to disinfect. Health Department inspectors will be following up to ensure compliance with disinfection protocols. Department staff are conducting outreach in the area to inform residents of the cluster and provide guidance for how best to protect themselves.

“We are saddened to hear about a death in a person who contracted Legionnaires’,” said Health Commissioner Dr. Ashwin Vasan. “Health Department staff are working to ensure that buildings in the cluster area are treated and conditions remediated quickly. While most people exposed to the bacteria do not get sick, Legionnaires’ disease can cause severe illness or be fatal for those at higher risk, including people pre-existing chronic health issues. That’s why it’s crucial that you seek health care as soon as you experience flu-like symptoms.”

An outbreak of Legionnaires’ disease has been reported in a Bronx neighborhood, city health officials said Friday.

Four people in the borough’s Highbridge neighborhood have been diagnosed with the disease, which is a type of pneumonia caused by bacteria that forms in warm water, according to the city Department Of Health. Other individuals are awaiting test results. The health department said it is investigating and “sampling and testing water from all cooling tower systems in the area of the cluster.” 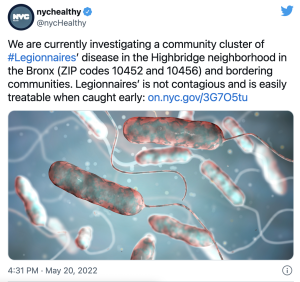 “Any New Yorkers with flu-like symptoms should contact a health care provider as soon as possible,” said Health Commissioner Dr. Ashwin Vasan. “Legionnaires’ disease can be effectively treated if diagnosed early, but New Yorkers at higher risk, like adults aged 50 and older, those who smoke or have chronic lung conditions should be especially mindful of their symptoms and seek care as soon as symptoms begin.”

Does New York City Have a Problem with Legionnaires’ Disease and Cooling Towers?

In New York City, the vast majority of Legionnaires’ Disease outbreaks seem to originate from cooling towers used by apartment complexes and other living facilities. The worst outbreaks in the city’s history occurred in 2015, when four distinct clusters of Legionnaires’ Disease occurred within a nine-month period in various areas of the Bronx and Queens. These outbreaks alone led to over 150 cases and 13 deaths.

Since 2015, there have been at least five outbreaks in New York City that originated from cooling towers – including two in Manhattan in 2018 that led to over 20 cases and 1 death.

Legionnaires’ disease is the common name for legionellosis or infection with the bacteria Legionella pneumophila, found in water systems.  It is estimated that 10,000 to 18,000 people in the United States are infected with the Legionella bacterium each year.

Symptoms include fever, chills, and a cough that may or may not produce sputum.  Additional symptoms include diarrhea, abdominal pain, and sometimes confusion.  Some patients may experience headache, muscle ache, loss of appetite, and tiredness.  Symptoms generally appear between two and ten days after exposure.

Legionnaires’ is contracted when a person breathes in small droplets of water from the air that contains the harmful bacteria Legionella.  While it is not a very common mode of transmission, Legionnaires’ disease can be contracted by aspiration of contaminated drinking water.  This happens when water “goes down the wrong pipe,” where a person is drinking, and the water enters the trachea or windpipe instead of going down the throat into the digestive tract.

Who is at Risk of Legionnaires’ Disease?

While anyone can be exposed to the Legionella bacterium, most health people show no symptoms or recover quickly.  For some, Legionnaires’ is a greater concern.  People who are 50 years or older have a higher risk of infection along with those with certain medical issues.  People with chronic lung disease such as obstructive pulmonary disease or emphysema are at a higher risk.  Those with a weak immune system or take drugs that weaken the immune system (such as chemotherapy and drugs taken after a transplant operation) are also at a higher risk.  People with cancer, underlying illness such diabetes, kidney failure and liver failure are in this high-risk category as well.

You should contact your health care provider and/or the local health department if you believe you may have been exposed to Legionella and you have symptoms such as fever, cough, chills, or muscle aches.

Legionnaires’ disease is treated with antibiotics.  In severe situations, life-threatening complications may occur, such as lung and kidney failure.  Other complications include septic shock caused by a subsequent blood infection that may cause a sudden and unsafe drop in blood pressure.

Health care providers have four common ways of detecting the Legionella bacterium to diagnose legionellosis or Legionnaires’ disease.  These include antigen testing, culture, antibody testing, and genetic testing.  A urine or respiratory sample is required to complete these tests.  The CDC suggests antigen and culture testing to diagnose Legionnaires’ disease.  Additional testes such as sputum culture, gram staining, complete blood count, and chemistry panels may also be ordered to help give a bigger picture of the patients’ overall health and any other ailment the body may be fighting.  An additional blood sample may be required for these tests.

Antigen testing is often performed as an initial test if Legionnaires’ is suspected and provides a rapid result.  This testing is specific to Legionella pneumophila and detects one of the bacterium’s proteins.  This can be found in the urine and sometimes other bodily fluids, but urine is the most common sample used.  A negative test result does not necessarily rule out the infection, as it only detects the serogroup 1 of Legionella pneumophila, though most cases of Legionnaires’ disease in the United States are a result of this specific bacteria.  This is a quick method to get a yes or no answer.  The “yes” allows the health care provider to look into specific treatment right away.  The “no” just means that the physician will continue the diagnostic process, which will likely include a bacterial culture regardless of the positive or negative outcome of the test.

To confirm the presence of Legionella bacteria and diagnose Legionnaires’ disease, a bacterial culture is often performed on sputum.  Sputum is a medical term for what someone coughs up as a result of respiratory illness.  The laboratory uses a special nutrient media that encourages the growth of Legionella and discourages the growth of other bacteria.  For this reason, it is considered the “gold standard” and a confirmation tool to diagnose the infection.  This test takes a little bit of time, though a positive culture may grow between 48 and 72 hours.  Negative cultures are held for seven days before a final result is reported to be sure no growth occurs.

Antibody testing using Direct fluorescent antibody (DFA) staining for Legionella species is another diagnostic tool a physician may use to diagnose Legionnaires’ disease.  This is a rapid test that uses a specialized stain that attaches to antibodies specific to Legionella bacteria.  This test can provide results in as little as 2 to 4 hours.

This disease is often underdiagnosed because many who are infected do not develop any symptoms.  Additionally, of those who do have symptoms often go undiagnosed, as the sickness presents symptoms similar to other types of pneumonia.  Specialized laboratory tests must be performed to confirm the presence of the bacterium to properly diagnose the illness of legionellosis.  These tests aren’t generally performed on someone presenting pneumonia symptoms unless Legionnaires’ is considered a possibility.  Common diagnostic tools include detecting bacteria found in sputum, finding presence of antigens in urine, or in blood samples by comparing two different samples taken three to six weeks apart.

If you were infected with Legionnaires disease in the 2022 Bronx Legionnaires Disease Outbreak and are interested in making a legal claim for compensation, we can help.  Call us for a free no obligation legal consultation at 833.330.3663, or send us an e-mail here.