Eating in my 30’s: An Algae Adventure of Nutrients 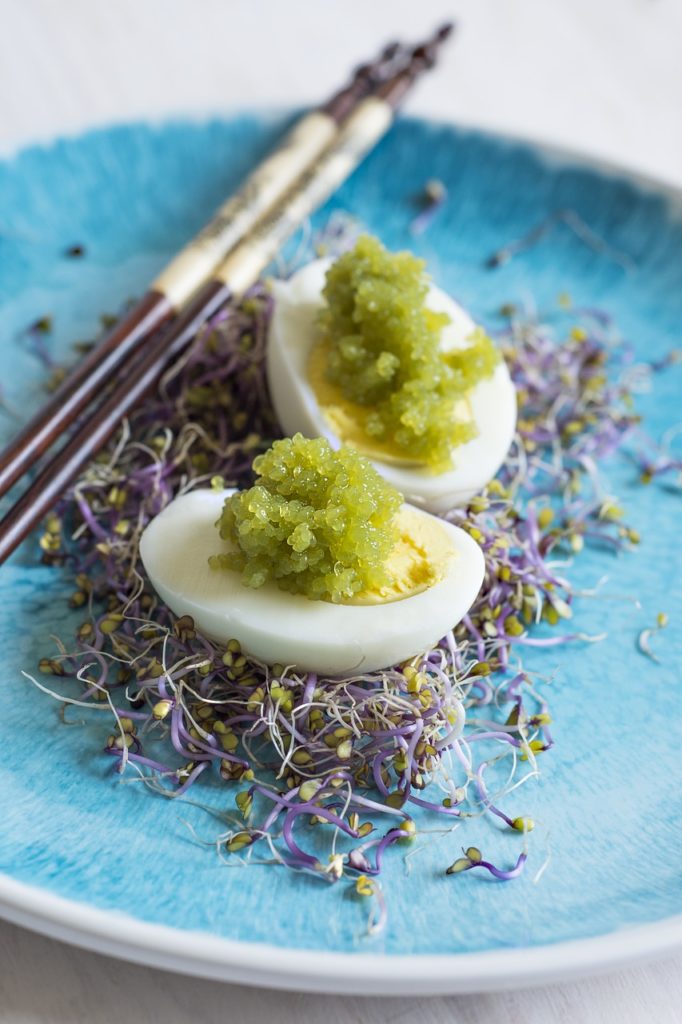 I’m taking a trip into adulthood eating, and it all begins with the superfood Algae.

I’ve hit the big 3-0. That’s 30 years-old. Let me say it again, 30. I’m obviously taking it well. I’ve realized it’s time for me to take a serious look at myself. I no longer have the safety-net of my 20’s to excuse my often-ridiculous eating habits, and my jeans are starting to fit tighter than they should. If I’d like to avoid aggressive exercise and maintain a semblance of health, I have got to get it together.

The roadblock? I’m a visual eater. This means if it looks good, I’ll probably give it a try. If it doesn’t, I’ll move right along to the more appealing feast. Basically, I’m a sucker for good presentation and clever marketing. I’m the gal that will eat the strawberry, but if the strawberries are dipped in chocolate, I’ll eat the whole platter. This is also partly due to my love of sweets.  Does this make me a picky eater? Maybe. This also might mean I just like pretty things. It also means I’ve turned my back on some nutritious habits. Dirty 30 has made me think twice.

With that said, I’m not adverse to change; but, I’d be much more swayable with a deliciously decorated platter. This is why delving into the world of Algae eating is a splash of cold water onto the face of my food-loving history.

Algae simply looks unappetizing. I’m sorry Algae. However, unlike me, Algae is a specimen of health. There are an estimated 30,000 to one million strains of Algae, and each one harbors unique health benefits. We’re talking a lot of good stuff for any age. In fact, after research for long-term space exploration sustenance options was directed by NASA in the 1980’s, microalgae became an ingredient in many baby formulas. This is because of the abundance of DHA in Algae. DHA is the nutrient found in breastmilk that highly promotes brain, eye, and heart development. This Omega-3 fatty acid is the reason why a mother’s breastmilk wins the nutrient matchup between alternative choices, and still does. Even with the DHA added, breastmilk holds the champion belt because there has been some argument over the chemicals used to extract the DHA and the recommended amounts required per individual needs. Nevertheless, the DHA itself remains a positive force in healthy living.

Algae is not just for cooing babies either. One type of Algae called Spirulina packs a wallop of good-for-you-treats. Spirulina contains 60% protein by weight. Spirulina is also an excellent source of Amino Acids, Omega 3, as well as essential vitamins and minerals like Iron. In fact, Spirulina producers are matching the cholesterol free source of Protein against beef, and the results are looking mighty fine.

But we have already seen this slimy, green machine in food products we can buy at the grocery store. Spirulina algae has quickly developed into a popular health food supplement that is put into smoothies and juices, like Naked brand’s popular Green Machine (which has 1.3 grams in every bottle). Algae is often found in vegan egg substitutes and even ice cream at your local Whole Foods. If you explore the web, dozens of health supplement companies offer spirulina and chlorella (another type of algae that lives in freshwater) as capsule and powder supplements.

It is even popping up on menus in various restaurants in the United Kingdom. (It is purportedly lauded by chefs for its intense flavor, having a strong umami taste.) In a February 2018 interview, chef Rob Howell, the head chef of the restaurant Root in Bristol, UK noted,

“Because we’re a vegetable-based restaurant, we have to think differently. Using seaweed and algae allows us to get more obscure, intense, flavour profiles. That hit of umami. We’ve got a dish at the moment, a charred hispi cabbage with seaweed butter sauce, which has become a favourite. It’s not come off the menu since we put it on. Everyone’s obsessed with it. We dry the seaweed out and then blitz it into a powder. We make a seaweed vinegar and an oil to go with beetroot. We make a really nice vegetable demi-glace. Instead of gravy or a meat jus, we roast off loads of vegetables with nori and kelp, and reduce it. It’s almost a better product than a beef gravy, which is crazy.”

Can Algae Do OTHER Good Things for Us and the Planet?

Studies are showing Spirulina can help fight symptoms of allergies. That’s right, it’s more than just a snack. Algae is proving to be medicinal.

Now, after learning what a few Algae strains can do, imagine the possibilities of thousands. Yeah, it sounds good to me too. It also sounds wonderful to the environment as well. Not only can algae be used as feed for farm life, Algae also produces oxygen. Single-celled marine plants produce 70 to 80% of the oxygen delivered to the atmosphere. That’s a big thank you to Algae from human-kind, am I right?

Algae can also be grown in areas where agriculture struggles. Deserts and salt-water arenas aren’t a problem when it comes to Algae production. With us Homosapiens increasing in population each year, we are going to need all the space we can get.

So, is this the super crop of the future? I’m leaning toward yes.

There are some hurdles we’ll have to overcome before we start using Algae to power our vehicles (yes, Algae can do that too), but it is definitely worth the work.

Algae has a tendency to smother itself. Algae likes to bask in the sun, which in turn makes it grow thicker and more nutritious. This density tends to suffocate the Algae beneath itself. So, either we utilize large land masses or we focus our attentions on innovation. It’s a good thing humans are the champions of innovation, and we’re already on the task.

Currently, there are a variety of ways to consume Algae, from pill to powder supplements, Nori sheets instead of breads and tortillas, seaweed chips, kelp noodles, and my personal favorite: a garnish to your Bloody Mary.

You know what? Maybe I’ll just kick my feet up and enjoy the Algae-wrapped sushi, or I might just enjoy that fruit smoothie with the Algae booster.

Growing up doesn’t sound so bad after all.