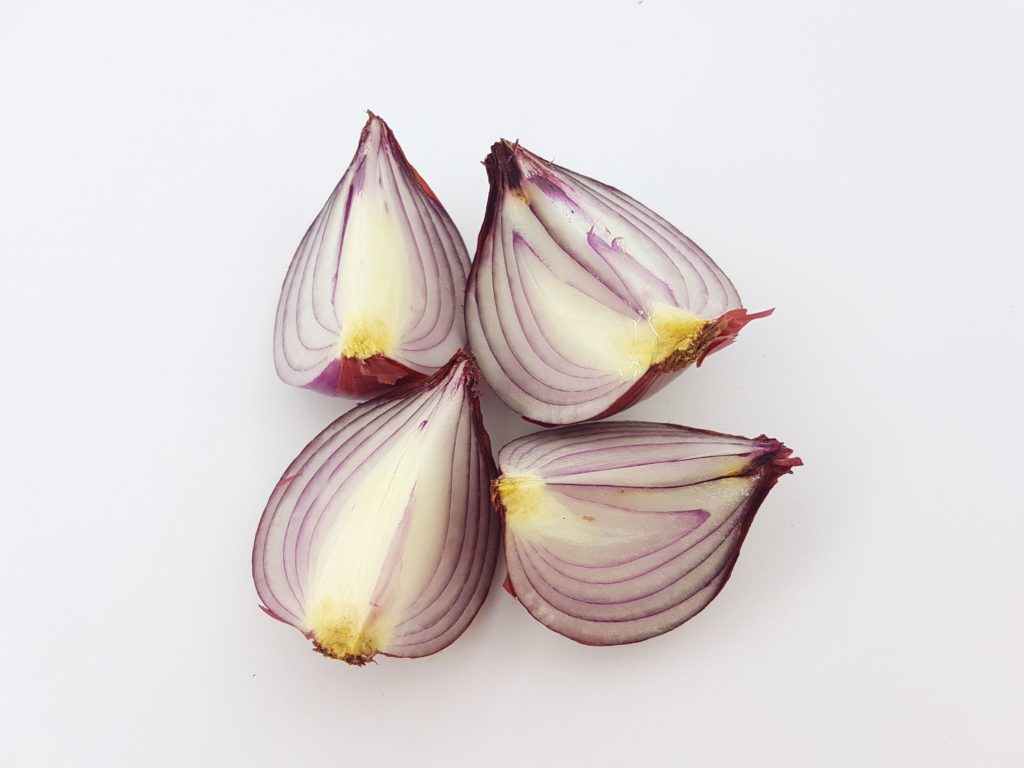 Residents of the US and Canada – we know have a source in the mystery Salmonella outbreak. Red onions! According to the CDC, 212 Americans are sick in this outbreak and 114 cases in Canada according to the Public Health Agency of Canada. PHA confirmed that they discovered the source of the outbreak just yesterday. Now, US distributor Sysco recalls red onions in Canada. But what about the US?

Here is everything we know about this Salmonella Outbreak and this recall:

According to the Government of Canada:

“Sysco is recalling red onions imported from the USA from the marketplace due to possible Salmonella contamination. Consumers should not consume the recalled products described below or foods containing these raw red onions. Food service establishments, institutions, retailers, distributors and manufacturers should not serve, use, or sell the recalled products described below. These may also have been purchased from Sysco on-line or through various restaurant locations.

Sysco is recalling red onions in Western Canada through the following Sysco locations: Victoria, Vancouver, Kelowna, Calgary, Edmonton, Winnipeg and Regina. The Canadian Food Inspection Agency (CFIA) will continue its investigation into other possible importers and additional recalls may follow.”

The agency confirmed that this recall was triggered by findings by the CFIA during its investigation into a foodborne illness outbreak. The CFIA is conducting a food safety investigation, which may lead to the recall of other products. If other high-risk products are recalled, the CFIA will notify the public through updated Food Recall Warnings.

The CFIA is verifying that industry is removing the recalled products from the marketplace.

The Canadian agencies have taken to Twitter to get the news out: 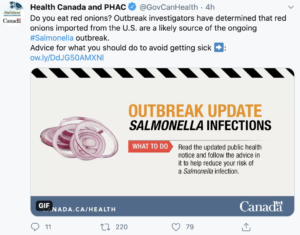 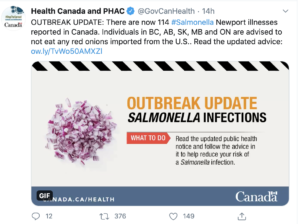 The Salmonella Outbreak in US and Canada

As of July 30, 2020, there have been 114 confirmed cases of Salmonella Newport illness linked to this outbreak in the following provinces: British Columbia (43), Alberta (55), Manitoba (13), Ontario (2), and Prince Edward Island (1). The individual from Prince Edward Island reported traveling to Alberta before becoming ill. Saskatchewan has not reported any confirmed illnesses related to this outbreak, but provincial public health authorities are investigating some Salmonella Newport illnesses in the province.

Individuals became sick between mid-June and mid-July 2020. Information is available for 102 illnesses. Out of 102 people, 16 individuals have been hospitalized. No deaths have been reported. Individuals who became ill are between 3 and 100 years of age. The majority of cases (56%) are female.

The Canadian Food Inspection Agency (CFIA) is conducting a food safety investigation. If contaminated food products are identified, CFIA will take the necessary steps to protect the public, including recalling the product as required. 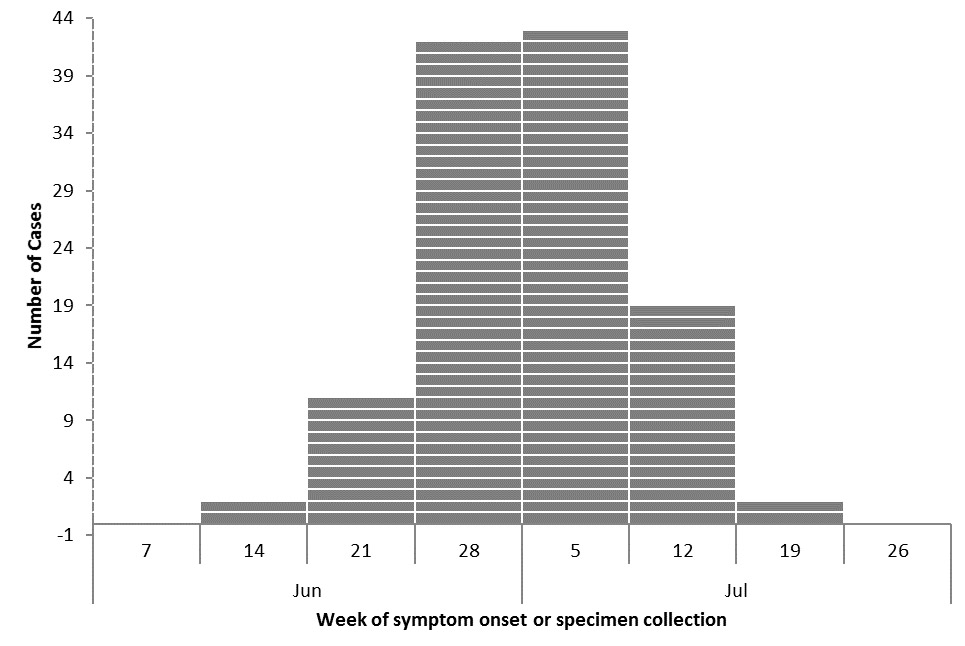 In the US, the CDC’s latest update includes: 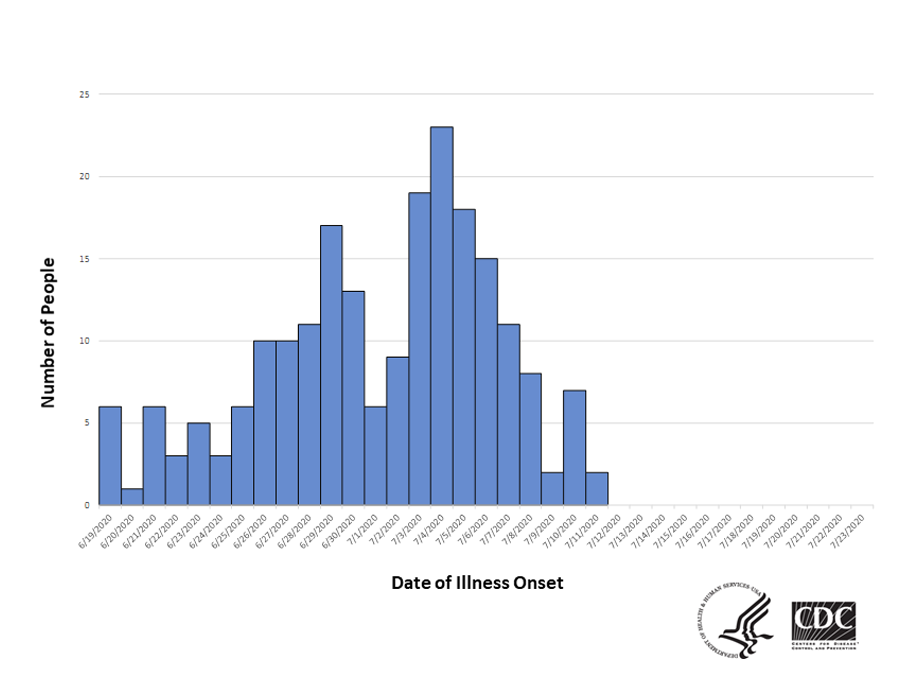 It is possible that more recent illnesses may be reported in the outbreak because there is a period of time between when a person becomes ill and when the illness is reported to public health officials. For this outbreak, the illness reporting period is between two and four weeks.

Salmonella is no joke when it comes to illness and can cause salmonellosis which is one of the most common bacterial foodborne illnesses.

A few varieties of salmonella bacteria result in typhoid fever, a sometimes deadly disease that is more common in developing countries.

Most people recover without treatment. In some persons, however, the diarrhea may be so severe that the patient needs to be hospitalized. Older adults, infants, and persons with weakened immune systems are more likely to develop a severe illness. Individuals concerned about an illness should contact their health care provider.

What should you do to protect your health?

It is a good idea to check your home for red onions, including whole, sliced, or chopped, as well as prepared foods that contain red onions as an ingredient, such as pre-made salads, sandwiches, wraps, or dips.

The PHA of Canada recommends:

If you got sick in this latest Salmonella Outbreak or from the Sysco red onions recall and are interested in making a legal claim for compensation, we can help.  Our Salmonella lawyer can help you pursue compensation for your Salmonella food poisoning.  Call us for a free no obligation legal consultation at (833) 330-3663 or send us an e-mail here.