The Cortland County Health Department took to Facebook and issued a health alert that there is a Wild Ginger Campylobacter Outbreak linked to a local asian fusion restaurant. Since the announcement, the restaurant has closed pending investigation.

Here’s what we know so far:

The Outbreak, Chicken to Blame

Thus far, eight people have been linked to this outbreak. Those who are confirmed cases ate visited “between Oct. 18 and Oct. 31 at Wild Ginger Fusion restaurant, exposing them to campylobacteriosis, caused by the campylobacter bacteria, typically linked to raw or undercooked chicken,” said Catherine Feuerherm, Cortland County’s public health director.

At this time, the ages and health conditions of those sick has not been released. 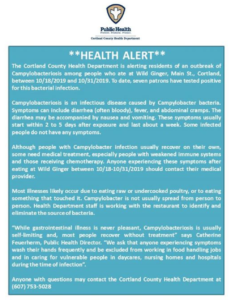 In the meantime, the restaurant is closed pending sanitation. The media is reporting that, once the cleaning is done, county health officials will then inspect the restaurant. No date was publicized on when that will occur. According to Feuerherm, “the sanitation department collected samples of food and sent them for tests at a state health lab in Albany to confirm what caused the outbreak.”

It is a bacterium that can make people and animals sick. Campylobacter jejuni causes most human illnesses, but other species also can cause human illness. People can become infected when they have direct or indirect contact with animal feces.

While Campylobacter is one of the most common causes of diarrheal illness in the United States, it is rarely a source of outbreaks. This is because most cases of campylobacterosis, like other foodborne illness, go unreported.

How Does Someone Catch Campylobacter?

Most cases of campylobacteriosis are from eating raw or undercooked poultry or when raw or undercooked poultry cross-contaminates other food products.  Human-to-human transmission is extremely rare.  Outbreaks are rare for this bacteria, but have been known to come from unpasteurized dairy products such as milk, cheese, and yogurt, or from contaminated water or produce.

What are the Symptoms of Campylobacter?

Campylobacter’s symptoms are much like many other foodborne illness. These include:

Symptoms usually start after 2-5 days a person is exposed to bacteria or ingests contaminated food. People who have weakened immune systems, children, elderly and pregnant women can have more complications during treatment.

Illness generally lasts about a week but can persist for up to 10 days.

How is Campylobacter Diagnosed and Treated?

A fecal culture (or stool test) is the most common diagnostic procedure for campylobacter illness. After 48 hours, the doctors will look for leukocytes in the culture. Most of the time, a campylobacter infection is treated with routine antibiotics.

Campylobacter does not spread from person to person but it can be transferred to an individual when they come in contact with the infected person.

It is a good idea to report your illness. The Cortland County Department of Health recommends to call 607-753-5028, option 4 to report their Campylobacter diagnosis.

If you or a loved one has suffered substantially due to being exposed to Campylobacter bacteria, contact our Campylobacter lawyers. The Lange Law Firm, PLLC offers free consultations and can help you recover the compensation you deserve.

Are there Potential Complications of a Campylobacter Infection?

Campylobacter infections can be serious and life-threatening when the bacteria spread to the bloodstream.  When it happens, there can be some potential long-term complications, including: reactive arthritis or Guillain-Barré syndrome.  This condition affects the nerves and onset is often several weeks after diarrheal illness subsides.  It is a result of the infected person’s immune system that is “triggered” to attack the body’s own nerves.  This could lead to paralysis that can last several weeks and requires intensive medical care for recovery.  Approximately 1 in every 1,000 reported Campylobacter results in Guillain-Barré syndrome.  While Guillain-Barré syndrome can be contracted in other ways, 40% of the cases in the United States link back to Campylobacter.

What can Restaurants and Home Cooks do to Prevent Campylobacter Infection?

According to the USDA Food Safety and Inspection Services (FSIS), “Meat and poultry can contain Campylobacter. However, the bacteria can be found in almost all raw poultry because it lives in the intestinal tract of healthy birds.” For this reason, proper kitchen safety and cleanliness is a must-have to prevent infection. As the FSIS notes, “Campylobacter bacteria are extremely fragile and are easily destroyed by cooking to a safe minimum internal temperature.”

In addition to cooking meat thoroughly, meat should also be refrigerated properly. Food should be thawed in cold water or in the microwave, never on the county. Frequent hand-washing also reduces contamination risk, as does the proper sanitation of food preparation materials. All cooking surfaces and cutting boards should be cleaned in hot, soapy water to reduce the risk of cross contamination.

How Can I Stay Safe?

When eating outside the home at a restaurant, there is not really much you can do.  The best choice is to plan meals outside of the home at restaurants with a good reputation and always eat from places you trust.  Health departments have local regulations and food establishments generally follow them.  If you are curious how your favorite places are doing, many cities publish inspection citations online.  Take a look and see how they did on their last checkup. Check out Yelp. You can also check to see if your food is completely cooked before you take a bite – but that isn’t 100% either.

If you got sick in this latest Wild Ginger Campylobacter Outbreak and are interested in making a legal claim for compensation, we can help.  Our Campylobacter lawyer can help you pursue compensation for your Campylobacter food poisoning.  Call us for a free no obligation legal consultation at (833) 330-3663 or send us an e-mail here.