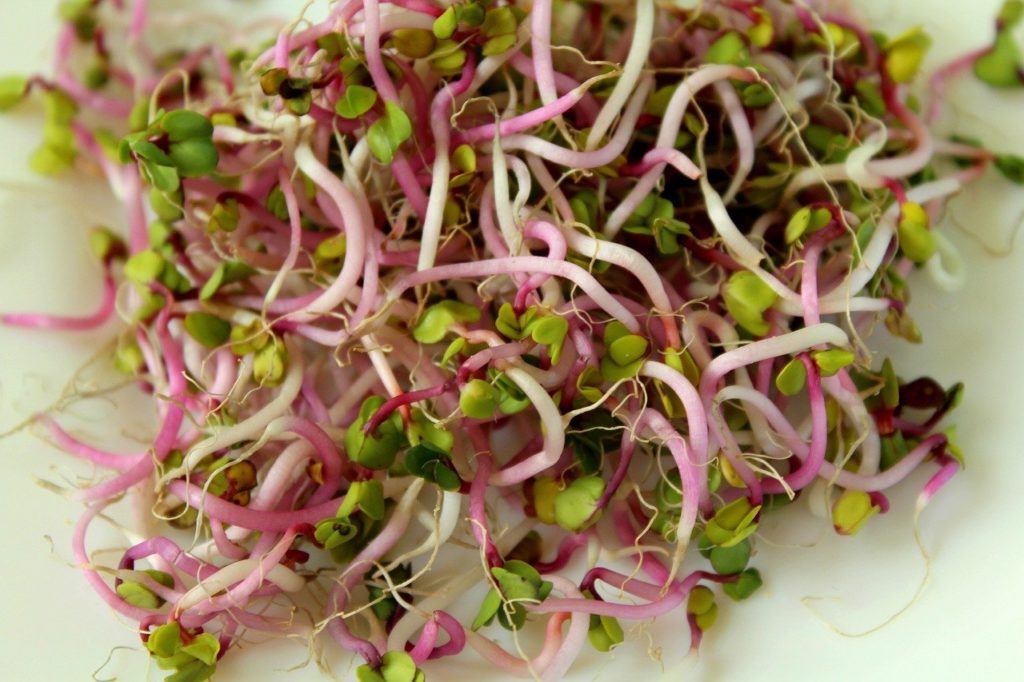 News of an Iowa Ecoli Sprouts Outbreak is all the buzz right now. According to an announcement from the FDA, clover sprouts manufactured by Sprouts Unlimited of Marion, Iowa has been linked to several Ecoli 103 illnesses in the state of Iowa. Here’s what we know:

About this Iowa Ecoli Sprouts Outbreak

The number of cases and health status of those sick has not yet been announced. But, a recall has been initiated. According to the FDA’s announcement,

“Sprouts Unlimited of Marion IA is recalling clover spouts in 4 oz packages because it may be contaminated with Escherichia coli O103 bacteria (E. coli O103). E. coli O103 causes a diarrheal illness often with bloody stools. Although most healthy adults can recover completely within a week, some people can develop a form of kidney failure called Hemolytic Uremic Syndrome (HUS). HUS is most likely to occur in young children and the elderly. The condition can lead to serious kidney damage and even death.

The sprouts available at retail were packaged in in pint containers from Sprouts Unlimited Inc. with a blue label on the lid. The UPC code 7 32684 00013 6 is stamped on the bottom right side of the label.

Sprouts Unlimited Inc. became aware of the potential contamination after receiving information from the Iowa Department of Inspections and Appeals, Des Moines, IA that a cluster of E. coli O103 illnesses epidemiologically linked to clover sprouts from Sprouts Unlimited Inc. An investigation and further tests are being conducted to determine the source.”

The Dangers of Sprouts

Mike Doyle, the Director of the Center for Food Safety at the University of Georgia stated “I consider sprouts to be among the most risky foods sold at retail”. And for good reason. At least 30 outbreaks have been linked to sprouts in the past 20 years.  This accounts for over 1,800 illnesses.  However, for every 20 to 100 illness reported, as much as another 100,000 are likely unreported.

Sprouts are high risk of bacteria contamination. Why? It is because these super foods need warm and humid conditions to, well… sprout.  These same conditions that allow the sprout to grow are also an ideal breeding ground for harmful bacteria such as E. coli, Listeria, and Salmonella.

Who is at Risk in this Iowa Ecoli Sprouts Outbreak?

Raw sprouts are a risk for anyone. But certain groups are at a higher risk for infection and complication.  The very young, the very old, and those with a compromised immune system are advised to avoid raw sprouts.  Those that fall into these high-risk categories should ask to omit raw or lightly cooked sprouts from dishes that may normally come with them.

Is There a Way to “Clean” Sprouts?

The U.S. Food and Drug Administration (FDA) has issued guidelines for producers and distributors of sprouts to help mitigate the inherent risk of the contamination risk associated with sprouts.  This may involve several steps, but at a minimum, soaking seeds in 20,000 parts per million solution of Calcium hypochlorite solution.  Growers often avoid this decontamination method, among other methods as they impact the germination rates and overall product yield of sprouts from seeds.

Enforcing decontamination and healthy growing practices in the pathogen prone sprouts is a major concern for food safety.  Stephen Sundlof, the director of National Center for Food Safety and Applied Nutrition at the FDA issued the following letter in 2009, pleading with seed suppliers, distributors, and sprout growers:

“This letter is intended to make you aware of the Food and Drug Administration’s (FDA’s) serious concern with the continuing outbreaks of foodborne illness associated with the consumption of raw and lightly cooked sprouts… Sprouts are often consumed raw (or lightly cooked in the case of bean sprouts) without processing to reduce pathogens that may be present. Therefore, the manner in which they are produced, packed, and distributed is crucial to minimizing microbial contamination, thereby reducing the risk of illness to consumers.”

What can you do to reduce the risk of food poisoning from sprouts?

It is a good idea to avoid eating raw sprouts, as even washing them cannot guarantee they will be safe to eat. If you are a sprout-lover and cannot live without them, here are some recommendations to help you stay safe:

Past outbreaks involving sprouts, or Sproutbreaks as coined by our own Samantha Cooper, have been more common than one would think.

Jimmy John’s is no stranger to outbreaks involving sprouts. In fact, there have been several. It is a wonder they continue to serve sprouts on their menu (or at least post a sprout warning). Here are some past Jimmy John’s outbreaks linked to sprouts:

The exact strain of E. coli involved in these cases is Ecoi O103. Although it isn’t Ecoli O157, it can still be dangerous.

“The most commonly identified STEC infections in North America are E. coli O157:H7 (often shortened to E. coli O157 or even just O157). When you hear news reports about outbreaks of E. coli infections, they are usually talking about E. coli O157.”

Symptoms of the outbreak strain E. coli O103 may vary from person to person in severity with those in higher risk demographics such as the very young, the very old, and those with a compromised immune system at highest risk of infection and complication.

Onset often occurs somewhere around 3 to 4 days after consuming contaminated food but can occur anywhere from 1 to 10 days after exposure.  You can also become sick from coming in contact with contaminated foods or food surfaces without washing your hands or consuming raw or undercooked beef products.  Food sanitation and cooking to an appropriate internal temperature of 160 ⁰F to 165 ⁰F for ground beef and ground beef containing casseroles respectively.

Symptoms generally last around 5 to 7 days with some people experiencing a longer illness.  The most common symptoms include severe stomach cramps, diarrhea that is often bloody, and vomiting.

A serious and life-threatening complication known as HUS that results in kidney failure may occur.  In fact, 5 to 10% of those diagnosed will fall victim to this complication.  HUS symptoms often develop about a week after initial symptoms and can coincide with improvement in the diarrheal symptom.  Look for decreased urination, paleness in the cheeks and lower eyelids, and feeling very tired.  While most people will recover from HUS after treatment, it is important for HUS patients to be hospitalized right away to avoid complete kidney failure or death.

If you got sick in this latest Iowa Ecoli Sprouts Outbreak and are interested in making a legal claim for compensation, we can help. We want you to know that an E coli Lawyer at the Lange Law Firm, PLLC is currently investigating this matter and offering free legal consultations. Our lawyer, Jory Lange became a lawyer to help make our communities and families safer. Anyone who was infected with E coli from romaine lettuce may be entitled to compensation for their injuries.  To learn more about this outbreak or making an E coli food poisoning claim, please contact the Lange Law Firm, PLLC by phone or contact us online.

If you or a loved one have become ill with E coli in this Iowa Ecoli Sprouts Outbreak, you can call (833) 330-3663 for a free legal consultation or complete the form here.