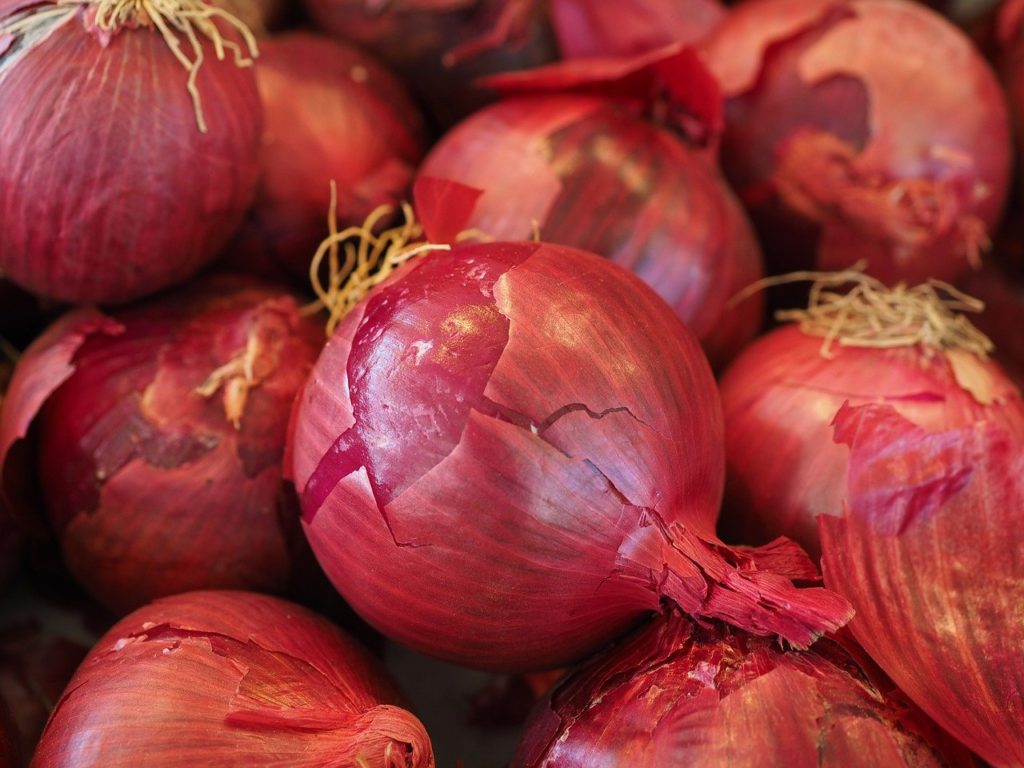 Michigan Red Onions Salmonella Outbreak sickens 23.  The Salmonella outbreak has been puzzling health investigators for weeks, with no real source in sight.  Michigan residents have been cautioned to look out for symptoms, but until today avoidance tactics were futile – without knowing what to avoid.  This outbreak that has sickened 510 in the United States and Canada and hospitalized 75 finally has a source!  Red Onions.

Investigators have been scratching their heads and working hard on traceback activities to narrow down the source.  Until today, the source was unknown.  A previous update indicated that “though it is typically from food, no specific food, grocery store, or restaurant has been linked to the outbreak.”  Other notable Salmonella Newport outbreaks have been linked to produce, meat, and dairy products.  But that didn’t do much to narrow down the field.

With the case count rising and additional states reporting infections, the urgency of the matter was growing.

Meanwhile, cases in the United States alone had risen to 396 linked to the outbreak.  The state of Michigan accounted for 23 of those.  A total of 59 Americans have been hospitalized so far.

All of this interview data, and no source?  When this happens, the source must be something widely distributed and used.  In this case, the result was not all that surprising.  Red Onions.

On July 30, 2020 a likely source was discovered. .The Public Health Agency of Canada announced, “Investigators have determined that red onions imported from the United States (U.S.) are the likely source of the outbreak.” Enough interview data indicated that many of the patients reported eating red onions before getting Salmonella food poisoning.

Our neighbors to the North were the first to break the case.

“Through a collaborative investigation between public health and food safety partners in Canada and the U.S., traceback information indicates that the contaminated red onions are being imported to Canada from the U.S. and distributed in Central and Western Canada. Red onions grown in Canada are not associated with this outbreak.”

Onions are such an innocuous food. Found in garnishes, all types of ethnic foods, and served in so many different ways. Raw, grilled, sliced, diced, and more!

Unless you are averse to the pungent vegetable, you don’t give it much thought. Particularly if you are asked what you have consumed in the last 2 weeks. You might think, Indian food, or burgers, or pizza. Was there onion on the pizza? Maybe…

This is what makes the interview process of traceback investigations so difficult. And probably what took investigators so long to identify a likely source. When the potential source is an ingredient as opposed to a whole product, it becomes tricky to identify.  This may be why it took time for investigators to unravel the mystery of the Michigan Red Onions Salmonella Outbreak.

How to Protect Yourself in the Michigan Red Onions Salmonella Outbreak

At this time, no producer or supplier has been identified for the Salmonella source. As a result, an overall avoidance of any red onion grown in the United States is advised. To protect yourself and your family from infection, identify if any red onions you may have already purchase and future red onions purchased at a store were grown in the United States.

If you have a recipe requires red onions that you just can’t live without, at the stores be sure to check where the red onion was grown. If the packaging or sticker indicates grown in the United States, don’t buy it. If there is no label, ask the retailer where the red onion came from the United States or imported. If this cannot be confirmed, do not buy it. It just isn’t worth the risk.

What You Need to Know About Salmonella

Salmonella is a foodborne bacterium and a common cause of food poisoning. It is often found in a variety of sources. Fruits, vegetables, meats (poultry in particular), and even dairy.

While each individual may experience some varying types and degrees of symptoms, most people with Salmonella infections experience:
• Diarrhea (sometimes bloody)
• Stomach cramps
• Fever

Other common symptoms include nausea, vomiting, or headache. Symptoms generally begin anywhere from 6 hours to 4 days after exposure. These infections will typically last around 4 to 7 days.

While many cases are so mild that the sickened individual may chalk it up to a little stomach bug and ride out the symptoms until they resolve on their own, others may not fair so well.

More serious Salmonella symptoms include:
• Diarrhea with a fever higher than 102 ºF
• Diarrhea lasting more than 3 days without improvement
• Bloody Stools
• Prolonged vomiting that prevents you from keeping liquids down
• Dehydration symptoms that include:
o Dry mouth and throat
o Dizziness when standing up
o Very little urine production

If you or a loved one experience any of these severe symptoms, seek medical help as soon as possible. If you believe you are ill with Salmonella infection, it is a good idea to notify your local health department, even if you do not require medical intervention. Every sample and interview helps bring the investigation one step closer to a source. Identifying the source will start the recall process to prevent others from becoming sick as well.

If your Salmonella illness is a result of a recall or outbreak like the current one affecting Michigan residents involving red onions, a Salmonella lawyer can help guide you through the process to ensure you receive the compensation you deserve.