Posted in Our Blog,Outbreaks & Recalls on October 6, 2019 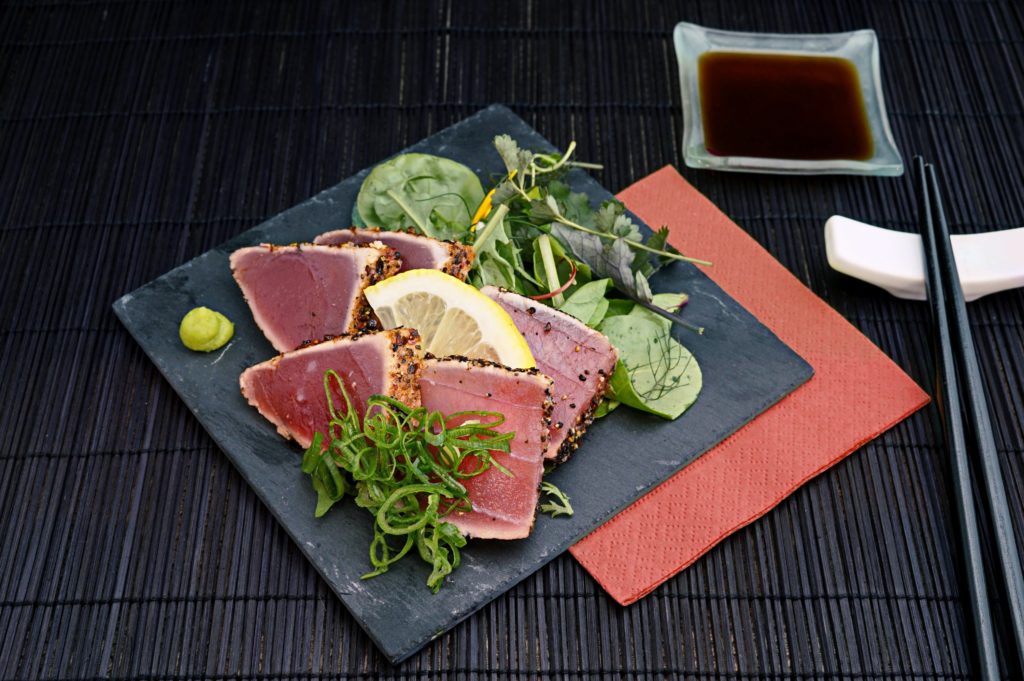 Word from the Food and Drug Administration

According to an announcement this week by the FDA:

As of the time of the recall, four reported illnesses have been confirmed.

The specifics of the recalled products related to this Yellowfin tuna Scrombroid recall are as follows:

What is scombroid fish poisoning?

Scombroid fish poisoning or histamine fish poisoning occurs when an individual eats fish with high levels of histamine or scombrotoxin. The scare of scombroid poisoning this year has led to Kroger’s recall yellowfin tuna steaks in 16 states and yet another recall this week by Mical Seafood.

The Kroger recall was initiated after several cases of scombroid food poisoning were reported to FDA. Consumers are being warned that they might not notice any signs of contamination by seeing or smelling the fish. FDA became aware of the outbreak on September 4, 2019. Ill people consumed tuna steaks from three separate Kroger retail locations in Ohio.

This one is eerily similar. Could we be talking about a similar or related supplier?

In most cases, symptoms are mild and do not last for a long time – between 8 to 12 hours. In some people, symptoms can last for a few days and can be severe. This happens in people who are more susceptible to getting histamine poisoning or have consumed fish that has very high levels of histamine in it.

Symptoms usually start quickly – within a few minutes to several hours – after eating the contaminated fish. Some of the most common symptoms include:

Some rare symptoms include fever, itching, burning sensation in the mouth, hives and unusual heart pounding sensation. Other severe reactions like drop in blood pressure or wheezing might occur.

Most people recover without treatment. In some cases, like those suffering from asthma or other allergic conditions, antihistamine might be prescribed. In asthma patients, a condition called bronchospasm might occur in which muscles of the bronchi contract and narrow, blocking respiratory airway and making it difficult to breathe.

Your healthcare provider will diagnose you on the basis of clinical observation based on the above symptoms and your history of eating food (usually fish) a short time before the symptoms started. A definitive diagnosis is done by performing tests on samples of fish for histamine.

Some doctors suggest that induced vomiting can clear up any poison that a person has ingested. This needs to be done only when the person is awake, alert and has eaten the fish within the past 3 hours. Oral charcoal may be given to patients who are treated early. The doctor might also pump the stomach to remove any food. Patient might be administered IV to prevent dehydration. Other medicines, like cimetidine, might be given to treat excess stomach acid.

IN ALL INSTANCES, MEDICAL ATTENTION IS RECOMMENDED. DO NOT TRY THESE REMEDIES AT HOME.

How Does This Happen?

It is believed that scombroid fish toxin is probably a combination of histamine and histamine-like chemicals. However, the toxin or poison does not affect all the individuals who have consumed it.

There is no test that is 100% reliable for assessing whether the toxin is present in the fish or not. Toxin does kill the bacteria, but the toxins can survive inside the tissues and can be absorbed after the food is consumed.

Scombroid fish poisoning is commonly associated with fish that belong to family Scombridae. This family includes tuna, herring, mahi-mahi, mackerel, and 100 other species of fish.

These fish are naturally high in histidine levels, so when they are stored in inadequate conditions, the levels of the bacteria increases to a point where they can cause poisoning.

Some of the outbreaks that have occurred in the USA are linked to imported fish. In 2006, two separate outbreaks, in Louisiana and Tennessee, of scombroid fish poisoning were linked to fish imported from Indonesia and Vietnam respectively. Since then, the FDA has made substantial improvements to make sure that histamine contaminated fish doesn’t enter US.

Susceptible fish categories include: Albacore, Amberjack, Anchovy, Australian salmon, Bluefish. Bonito. Kahawai, Herring, Mackerel, Mahi-mahi, Needlefish, Saury, Sardine, Skipjack, Wahoo and Yellowfin Tuna. Any fish that has scombroid toxin in it will have a metallic or peppery taste. More fish might get added to the list once the testing for the toxin improves.

How to prevent scombroid fish poisoning?

Our mission is to help families who have been harmed by contaminated food.  When corporations cause food poisoning or Legionnaires’ disease outbreaks, we use the law to hold them accountable.  The Lange Law Firm is the only law firm in the nation solely focused on representing families in food poisoning lawsuits and Legionnaires disease lawsuits.

If you have become sick with Scombroid food poisoning and are interested in making a legal claim for compensation, we have a food poisoning lawyer ready to help you.  Call us for a free no obligation legal consultation at (833) 330-3663 or send us an e-mail here.