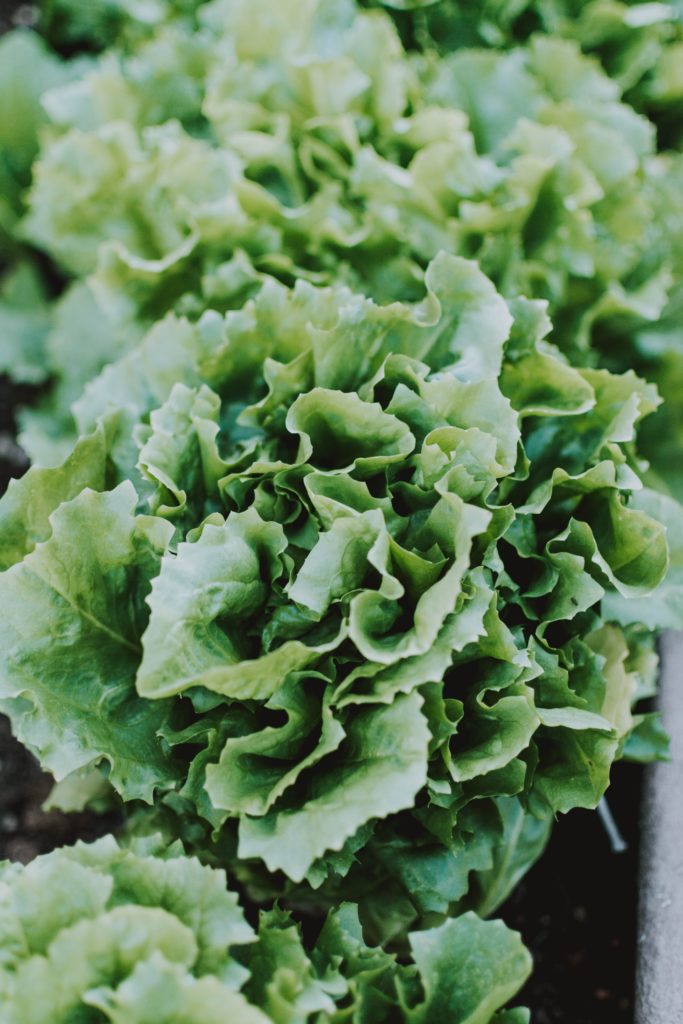 The CDC just announced a new multistate Ecoli outbreak. Their announcement, however, is a bit odd. It appears the Maryland Ecoli outbreak cases linked to Ready Pac Foods Bistro® Chicken Caesar Salad are part of the mix (no pun intended) but those in other states who have tested with the same strain of Ecoli have not reported eating that particular product. Nothing is mentioned in the announcement as to whether lettuce or lettuce products were eaten by others who are sick. Further, 6 Wisconsin cases are included in the outbreak. Could these be linked to the 20-case mystery source in the Wisconsin Ecoli outbreak?  Could romaine be to blame again? While the theories are flying around about this multistate Ecoli outbreak, here’s what we know: 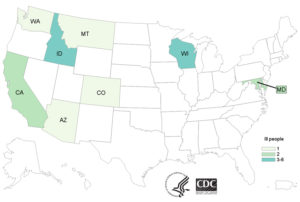 We do know the timing of illnesses based on the current confirmed cases. 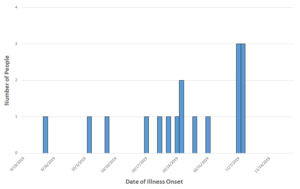 The illness onsets appear to have started in mid-September and have continued steadily through mid-November.

According to the CDC:

“Illnesses started on dates ranging from September 24, 2019, to November 8, 2019. Ill people range in age from 3 to 72 years, with a median age of 16. Fifty-six percent of ill people are female. Of 17 ill people with information available, 7 hospitalizations have been reported, including 2 people who developed hemolytic uremic syndrome (HUS), a type of kidney failure. No deaths have been reported.”

Also, “Public health investigators are using the PulseNet system to identify illnesses that may be part of this outbreak. PulseNet is the national subtyping network of public health and food regulatory agency laboratories coordinated by CDC. DNA fingerprinting is performed on E. coli bacteria isolated from ill people by using a standardized laboratory and data analysis method called whole genome sequencing (WGS). CDC PulseNet manages a national database of these sequences that are used to identify possible outbreaks. WGS gives investigators detailed information about the bacteria causing illness. In this investigation, WGS showed that bacteria isolated from ill people were closely related genetically. This means that people in this outbreak are more likely to share a common source of infection.”

It is, however, very likely that there are more cases that have not yet been linked to the outbreak – due to the time it takes from illness to reporting to outbreak link. This process can sometimes take a few weeks.

Do not eat or sell Ready Pac Foods Bistro® Chicken Caesar Salads with a “Best By” date of October 31, 2019.

Take action if you have symptoms of an E. coli infection.

Ecoli (Escherichia coli) is a bacteria that lives in all animals, including humans. Most types of Ecoli are safe to husman, and even our intestines use Ecoli to break down food. The difference is some of E. coli strains are pathogenic. These are the types that cause unpleasant and sometimes serious illnesses.

Like most other foodborne symptoms, Ecoli is hard to diagnose. This is not due to the ability for hospitals to test to see what has made you ill, it is because the signs are mostly all the same. Do any of these symptoms look familiar?

Looks like a list for the common flu. These are also what it feels like to have Ecoli. As you can see, there is little difference without seeking medical help. That is my admonishment: please do not take any sickness lightly. Make sure you see a medical professional as soon as possible because the alternative is not pleasant.

The majority of people infected with E. coli will exhibit symptoms of diarrhea and abdominal cramps within 2 to 8 days after ingestion of the bacteria.

In extreme instances, pay special attention to these indicators that something is severely wrong:

In some circumstances a more serious illness may develop, such as hemolytic uremic syndrome (HUS).  HUS is a type of kidney failure that develops as a result of E. coli infection.

If you believe you have developed an E coli infection, we want you to know that an E coli lawyer at the Lange Law Firm, PLLC is currently investigating this Multistate Ecoli Outbreak and offering free legal consultations. Our lawyer, Jory Lange, became a lawyer to help make our communities and families safer. Anyone who was infected with E coli from this outbreak may be entitled to compensation for their injuries.  To learn more about this outbreak or making an E coli food poisoning claim, please speak with our team at the Lange Law Firm, PLLC.