Bruce Who? Raw Milk From Pennsylvania Linked to Brucella Infection 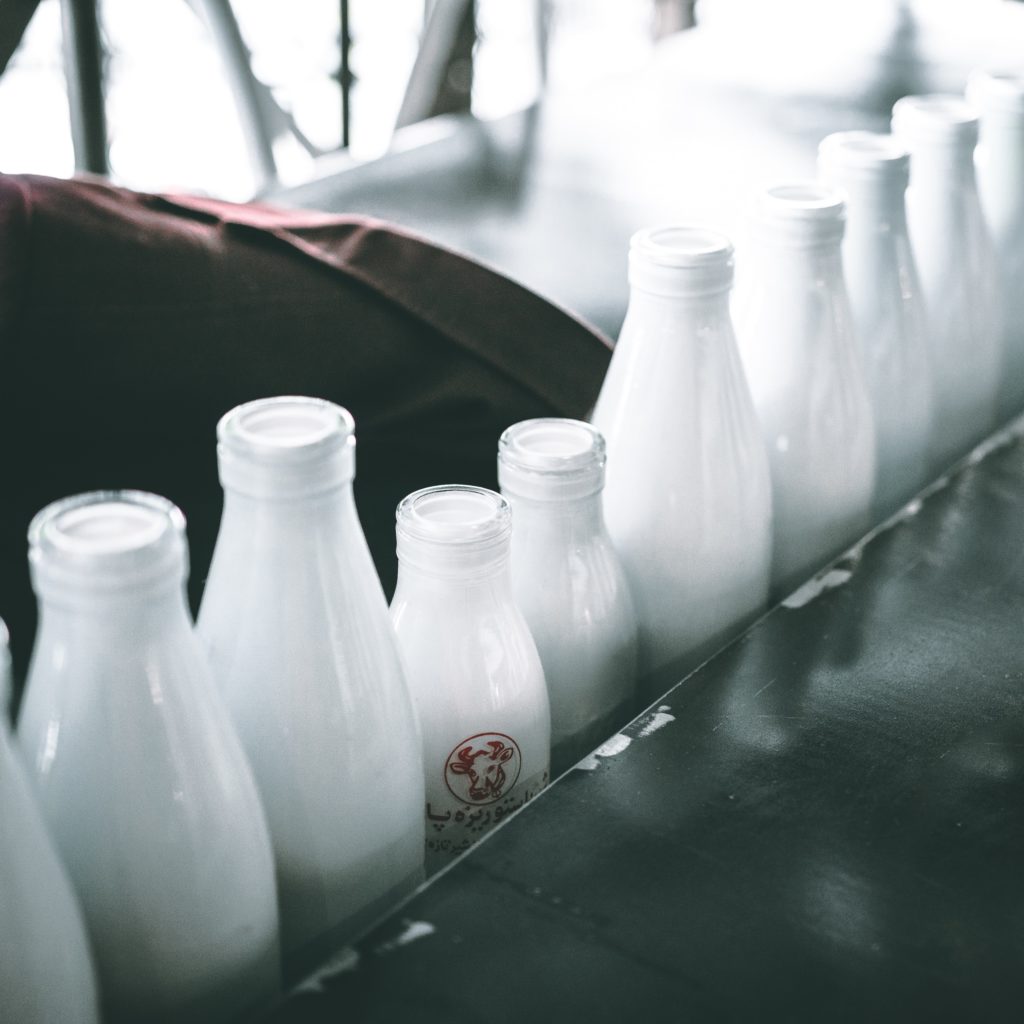 Raw milk is in the news again, with an outbreak no less. Is it Listeria? E. coli? Salmonella? Nope.  This time for an illness known as Brucella. And not just any Brucella, but one that is resistant to first-line drugs and can be difficult to diagnose because of limited testing options. AHHH! A New York resident has fallen ill with RB51 – a strain of the bacteria Brucella abortus, according to the Pennsylvania Press Room.  New York state officials notified the Pennsylvania Department of Agriculture of the illness that has been confirmed by the Center for Disease Control and Prevention (CDC).

Just yesterday, the CDC announced that what was thought to be a local outbreak was really in several states:

“The Centers for Disease Control and Prevention and state health officials are investigating potential exposures to Brucella strain RB51 (RB51) in 19 states, connected to consuming raw (unpasteurized) milk from Miller’s Biodiversity Farm in Quarryville, Pennsylvania. One case of RB51 infection (brucellosis) has been confirmed in New York, and an unknown number of people may have been exposed to RB51 from drinking the milk from this farm. ”

What We Knew in January…

The illness was linked to a Lancaster County farm that sells unpasteurized cow’s milk and dairy products – Miller’s Biodiversity Farm.  State officials indicate that consumers who purchased unpasteurized products from this farm should immediately discard the products as they may contain a strain of Brucella abortus (RB51). Milk samples from Miller’s Biodiversity tested positive for  RB51. A cow that tested positive for RB51 has been removed from the milking herd.

While New Jersey Health Commissioner Dr. Shereef Elnahal indicates that to date there have been no illnesses in New Jersey related to the incident in New York.  The New Yorker reports that though this may be an isolated occurrence, it is the third case in the last 2 years of an RB51 infection related to raw milk consumption including one patient in Texas in 2017 and another in New Jersey that same year.

Additionally, Commissioner Elnahal explains that it is illegal to sell raw milk or raw milk products in New Jersey due to the health risks that this product carries.  “In general, unpasteurized milk can contain dangerous bacteria, so if you have consumed raw milk products and become ill, immediately seek medical care and inform your health care provider of the raw milk consumption,” says Elnahal.

Miller’s Biodiversity Farm – About the Farm

The Farm of interest is called Miller’s Biodiversity Farm.  This farm describes itself as a “private food club” and Amish farm.  Food products are only available to members and distributed through various group pickups.

Dairy products are one of the top products the farm prides itself with.  “Our milk is the old-fashioned cream-top kind.  Our cows are completely grass-fed.”  Their cows are maintained in traditional Amish fashion.  They claim that in warmer months the cows are moved 3 times a day to new grass.  In the winter they are given hay that is supplemented with nutrients.  “Our cows are never given grain, hormones, or any chemicals.”

This au naturel approach also sick cows too.  “If a cow does become ill, we treat them with homeopathic remedies and exhaust all options before resorting to the rare case of antibiotics.”  While the farm does not discuss vaccinations, the potential presence of Brucella abortus indicates that they likely take a homeopathic approach there as well.

What is the Hype About for Raw Milk?

Despite health risks associated with unpasteurized milk – or any other potentially harmful product for that matter, there is a hype of raw milk in today’s society.

“Raw milk products can contain harmful bacteria which can pose serious health risks,” said New York Health Commissioner Dr. Howard Zucker.  “Pasteurization standards are in place to protect the public from diseases which are transmitted in raw milk and dairy products.  It is critical for New Yorkers to understand the dangers of these products and avoid their consumption.”

Regardless of beneficial properties of raw milk, as most things go, the risks outweigh the benefit and so a product is deemed illegal for sale.  Raw milk may contain harmful parasites, viruses, and bacteria that may lead to sickness or potentially death.  Even raw milk from certified, organic, or local farms cannot guarantee safety.

One study gathered data from the years 2007 to 2016.  In those 10 years there were 144 outbreaks linked to raw milk.  These outbreaks spanned 32 states in total.  Those under the age of 5 years were most affected.

How is Milk Pasteurized?

Pasteurization gets its name from the scientist that discovered the method, Louis Pasteur.  It is the process of heating the milk or milk product in “properly designed and operated equipment” to specified temperatures for an appropriate duration.  Vague enough?  That is because there are several different methods a dairy producer can employ.

The most common method of pasteurization in the United States today is what is known as High Temperature Short Time (HTST) pasteurization.  This method uses metal plates and hot water to rapidly raise milk temperatures to at least 161 ⁰F for not less than 15 seconds, followed by rapid cooling.

Higher Heat Shorter Time (HHST) is similar to HTST but uses slightly different temperature for an even shorter time.

Ultra Pasteurization (UP) is even faster and higher with a temperature of 280 ⁰F for 2 seconds.  This type of pasteurization still requires refrigeration but results in a longer shelf life.

Ultra High Temperature (UHT) requires commercially sterile equipment and filling product aseptically into hermetically sealed packaging.  This allows the product to be “shelf stable” without the need for refrigeration until the product is opened.

Told you it was complicated.  You can find out how your milk is processed by taking a look at the label.  Believe it or not, it is on there.  It is just something that most people take for granted and don’t look too much at.

What is Brucella?  How Do I Get It and How Do I Know If I Have It?

Back to Brucella.  Did you know that the cow that transmits the disease can show no signs or symptoms in the animal?  Humans on the other hand can get pretty sick.

How do I get a Brucella infection?  There are a few ways people can become infected.  The way most people think about is ingesting undercooked meat or consuming unpasteurized dairy products from an animal infected with Brucella.

Infection might also transmit though skin wounds and mucous membranes by contact with infected animals.  Slaughterhouse workers, meat-packing plant employees, and veterinarians are high on this list.  Also, those who hunt animals may become exposed through these same routes.  Commonly infected game animals include bison, caribou, elk, moose, and wild hogs.

Person-to-person transmission is extremely rare, though breast-feeding mothers may transmit infection to their infants.  While possible, sexual transmission of Brucella is even more rare.  Though uncommon, transmission is also possible through blood transfusion or tissue transplantation.

If you experience any of the symptoms of Brucella infection and have consumed raw milk recently, seek medical attention right away!

In the meantime, the CDC recommends everyone avoid “raw milk and raw milk products are those that have not undergone a process called pasteurization that kills disease-causing germs.”

Our Brucella Lawyer is Here to Help You

If you believe you have developed Brucella after drinking raw milk or eating raw milk products, we want you to know that a Brucella lawyer at the Lange Law Firm, PLLC is currently investigating this matter, helping several families already involved in the outbreak, and offering free legal consultations. Our lawyer, Jory Lange, and became a lawyer to help make our communities and families safer.

If you or a loved one have become ill after eating or drinking raw milk, you can call (833) 330-3663 for a free consultation or complete the form here.